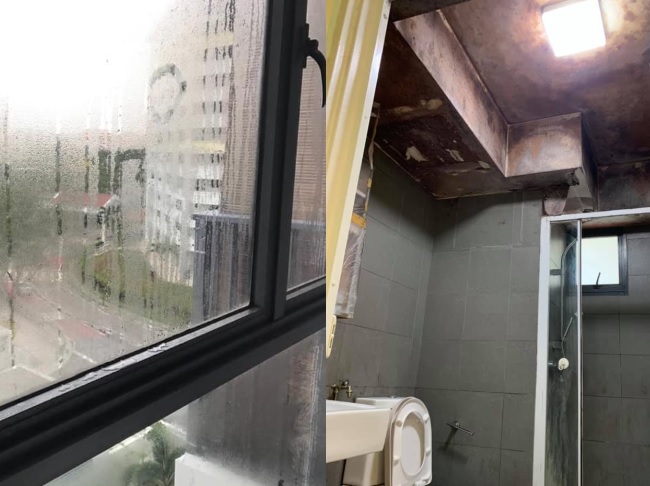 Facebook user “Geraldine Tang” has been experiencing alleged sewage leaks, foul odour, severe condensation, contaminated water and massive wall stains ever since she moved into her DBSS flat in 2015. She claimed that she is still having these problems because the authorities did not take action.

The HDB and PUB have responded that this is not true. In fact, they have been following up on her complaints since 2013 – even before she moved into her current DBSS.

They tested water samples, conducted leak detection, checked on her indoor air quality and sanitary system but found no issues. There was nothing wrong with the pipes and the water is perfectly safe for drinking.

It turns out that the problems may have been caused because Tang constantly keeps her windows and doors closed. She also uses too much chemicals, too often, to wash down her house. This is despite repeated advice from government agencies to refrain from doing just that.

An Indoor Air Quality specialist who had inspected the flat reported that windows and doors in the flat were constantly closed, resulting in poor ventilation as well as high temperature and humidity within the flat. It was also observed that multiple cleaning chemicals were used to disinfect the floor and wash the walls of the flat… the microbial growth is likely a result of the poor ventilation and excessive washing over time. Ms Tang, however, did not heed the advice of the specialist to ventilate the flat.

It is no wonder she has been experiencing these problems even after moving a few times. Furthermore, her neighbours did not meet with similar issues. In order to solve the problems once and for all, perhaps it is time for her to try heeding professional advice and start ventilating her flat. Otherwise, there is no point in lodging the same complaint so many times just for it to repeat itself again. Isn’t it?

It’s A New Flat, But It’s A Nightmare To Live In…﻿Have you seen anything like this before? This is what happened to…

We are aware of online discussions regarding alleged leaks within a DBSS flat, which the owner claims resulted in odours…

Posted by Housing & Development Board on Monday, 13 July 2020