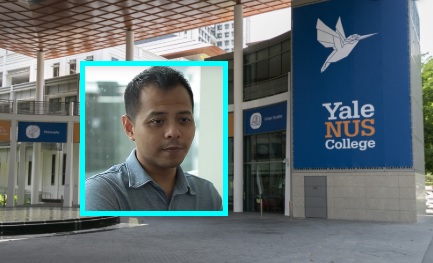 Last night, local playwright Alfian Sa’at published excerpts from his upcoming press release regarding his “Dissent and Resistance” module which was cancelled by Yale-NUS. He said that the college did not give “real reasons” for the cancellation and unfairly made him a scapegoat. Here is his side of the story:

Yale-NUS approached me first, only offered $600

Alfian said that Yale-NUS was the one who had approached him first even though they knew that he is no academic. He was not impressed that it was only going to offer him a $600 fee to run a 5-day course.

I did not feel that this was commensurate with the amount of effort I would have to put in to secure speakers, book venues, lead students on excursions and discuss readings with them.

I have a play to run you know

He also said that the course was going to be held around the same time as his play and it cannot be helped that he did not put the course plan as his priority.

Committing to Week 7 would mean that I would have to sacrifice one week away from watching rehearsals.

I did it out of goodwill

He eventually agreed to design the course out of the goodness of his heart.

I made this decision out of a sense of goodwill towards the college. I had conducted an ‘Introduction to Playwriting Module’ at the college in the past semester and it was an overall pleasant experience.

Alfian was also perplexed that the college blamed him for choosing to teach a topic that he was familiar with. He said that he was merely following a sample guide which included different activities: a walking tour, 2 film screenings, 2 documentaries, 3 panel discussions, etc.

As it was my first time designing a Week 7 programme, I tried to copy the sample provided as much as possible… Believing that students would also benefit from some hands-on sessions, I also included 2 workshops: 1 on making signs for demonstrations to be conducted by a Singaporean who had studied in the UK, and 1 on Forum Theatre techniques by a Singaporean theatre company.

He may have followed the course structure but he definitely did not follow the curriculum guidelines with his questionable choice of classes. Being the elite that he is, surely he would have realised?

At the moment, Alfian Sa’at has only posted points 3 to 5 of his upcoming press release. Let us look forward to points 1 and 2 and more of his argument which will hopefully be more substantial and not sound like an excuse.

This thing is taking a very long to write but here's where it all began…"3) On 22 March, I met with Person A. My…