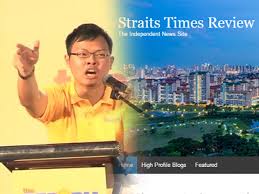 STR’s Alex Tan: I will not obey POFMA or Singapore as I am in Australia

The “States Times Review” has done it again. The alternative news outlet was issued a correction direction under the Protection from Online Falsehoods and Manipulation Act (POFMA). It was told to admit that its article contained the following falsehoods:

1. That a whistleblower was arrested for making allegations about a PAP candidate and her supposed religious affiliations,

2. That the “NUSSU – NUS Students United” Facebook page has been removed and is under investigation by order of Minister Shanmugam.

Contrary to STR’s post, nobody has been arrested or charged. The NUSSU page was also taken down on its own accord and not by order of the government. STR’s founder, Alex Tan, has responded that he will not comply with the correction order as he is now in Australia and will not heed orders from a “foreign government”.

It is no surprise that STR/Alex Tan is branded as fake news. This is not the first time he has got into trouble with the authorities for publishing falsehoods.

In 2016, he wrongly accused Minister Shanmugam for saying that Eurasians are considered Indians and will never stand a chance to be President because they are outnumbered. Two years later in 2018, he published falsehoods that undermined the integrity of the Monetary Authority of Singapore. It claimed that Singapore had signed unfair agreements with Malaysia and had a hand in laundering 1MDB funds.

Tan has rebranded his news outlet several times but one thing is constant – his penchant for publishing fake news. Netizens who are familiar with STR will know that it cooks up news and skews facts just to put the government in a bad light. He claims that he wants to overthrow the PAP and make things better for Singaporeans, but how can he achieve that when all he does is make things up?

It is ironic that he wants to make things better for us but claims to be an Australian citizen and refers to Singapore as a “foreign government”. If he truly cares for our nation, he will not publish content to mislead Singaporeans.

This is the second time the POFMA has been invoked. The first was in response to a Facebook post by opposition politician Brad Bowyer, who has since made the necessary corrections. It really isn’t difficult, is it?

Posted by Ministry of Home Affairs, Singapore on Wednesday, 27 November 2019

Response to POFMA:Firstly, I would like to begin by thanking the Singapore government for bringing more site traffic…

5 Dos For a Safe and Enjoyable Overseas Road Trip