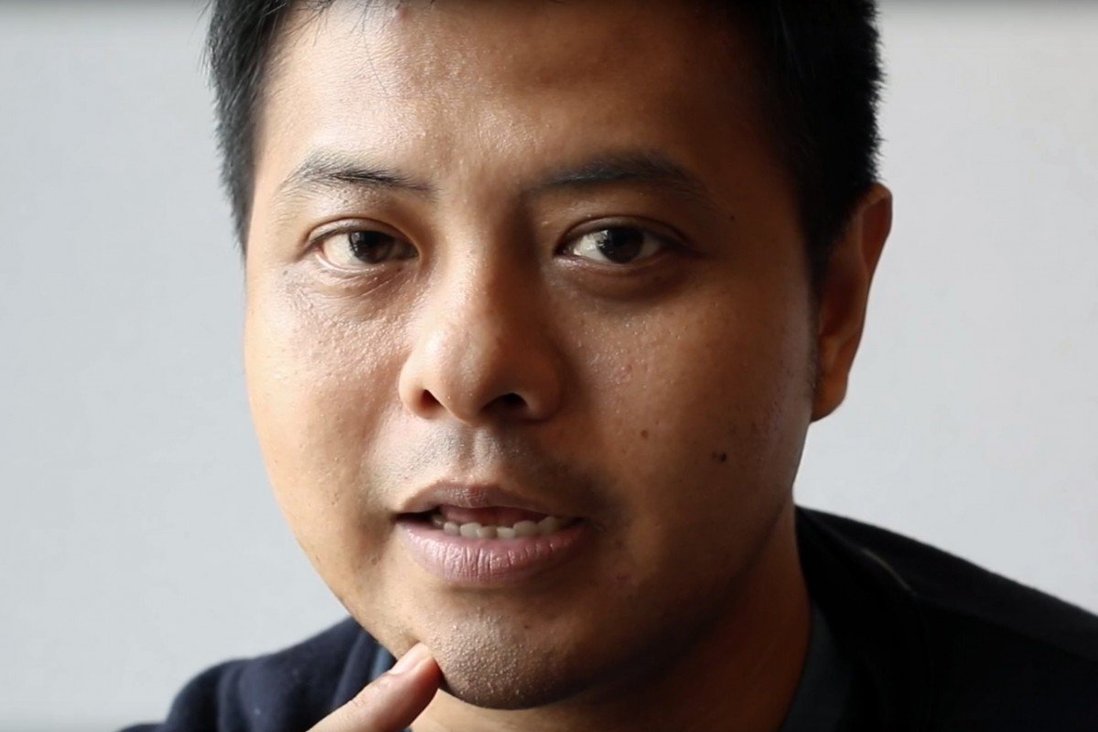 Singapore’s Malay poet Alfian Sa’at recently came out to defend Zainal Abidin Shaiful Bahari, the man behind the racist Twitter account “sharonliew86”. The account masqueraded as a Chinese lady and shared racist tweets targeted at minorities. Alfian claimed that the account was satirical which employed a form of “ironic racism” so that audiences will confront their own prejudices and racialised thinking. It was unfortunate that the target audience failed to decode Zainal’s message and took it at face value. Thus, he argued that a jail term is unwarranted for Zainal since his intent was not malicious.

Many of our activists and opposition politicians agreed with Alfian’s post, commenting that Zainal’s actions are not deserving of jail term. Sudhir Thomas Vadaketh, a blogger/author commented that it is shameful to see Zainal jailed and thinks that such critiques adds value to the discourse. Andrew Loh, founder of The Online Citizen (TOC) agreed that a jail term is excessive for a bad satirist. Melissa Chen who helped Amos Yee get asylum in US, thought that the incident was ridiculous and Zainal should not be charged, let alone be jailed. Dr Paul Tambyah, Chairman of Singapore Democratic Party (SDP), thanked Alfian for his references which discussed how the account uses satire to combat racism. 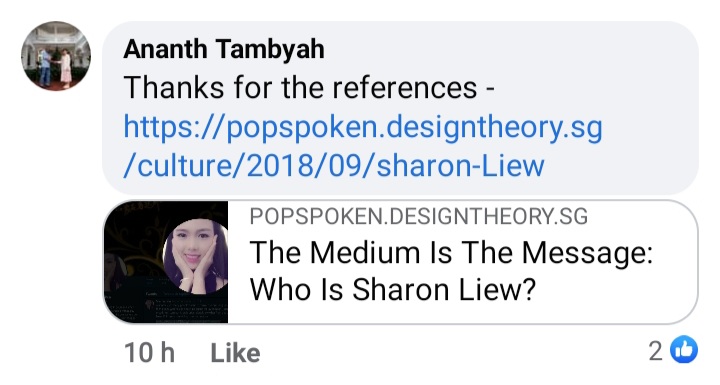 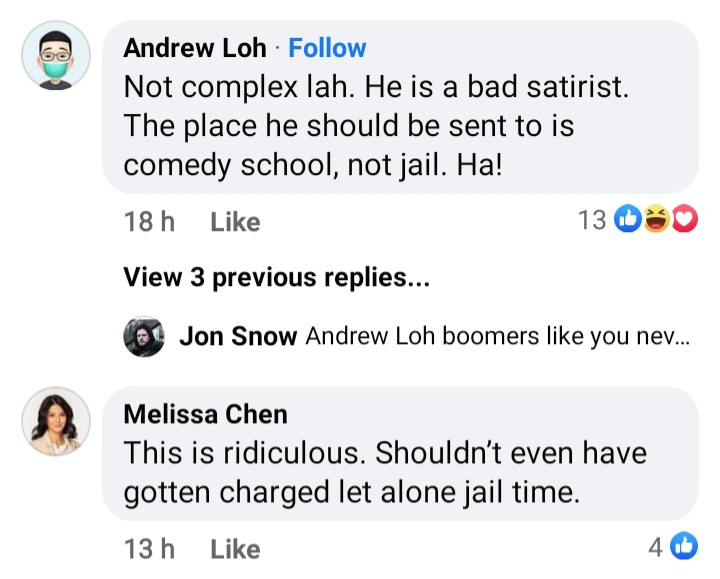 It reeks of hypocrisy when they try to frame Zainal’s intention as good. If the scenario was reversed, would they have jumped to his defence? If a Chinese was behind “sharonliew86”, would they argue that this person is trying to improve race relations via “ironic racism”?

However, not everyone agreed with Alfian’s perspective. FB user “Bhas Kunju” urged them not to be too quick to make excuses for Zainal’s actions, because his tweets offended a lot of minorities and were nowhere near satire. Alfian even admitted that the issue is complex and it may not a straightforward case of dark/edgy humour. 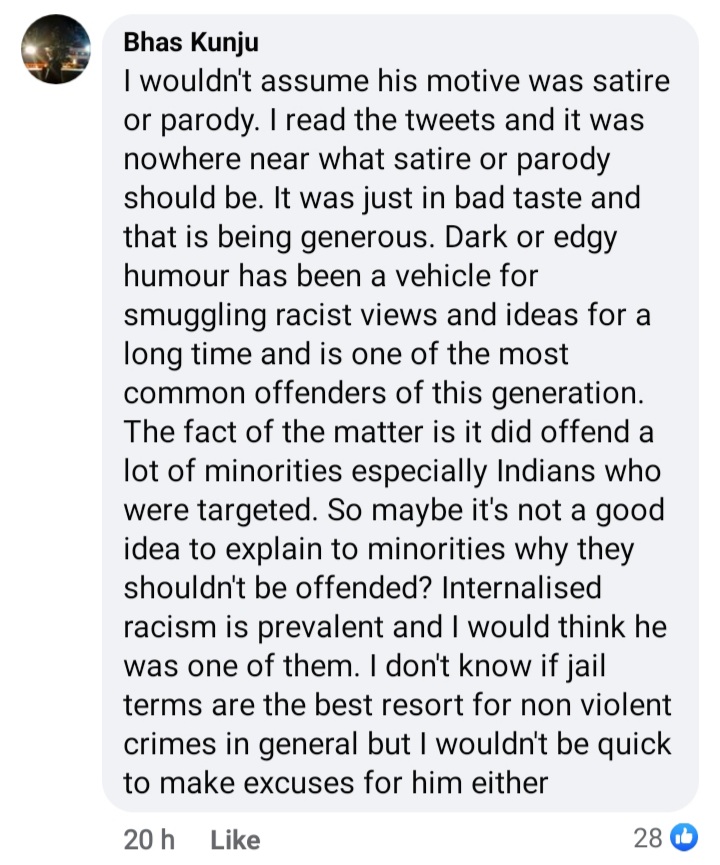 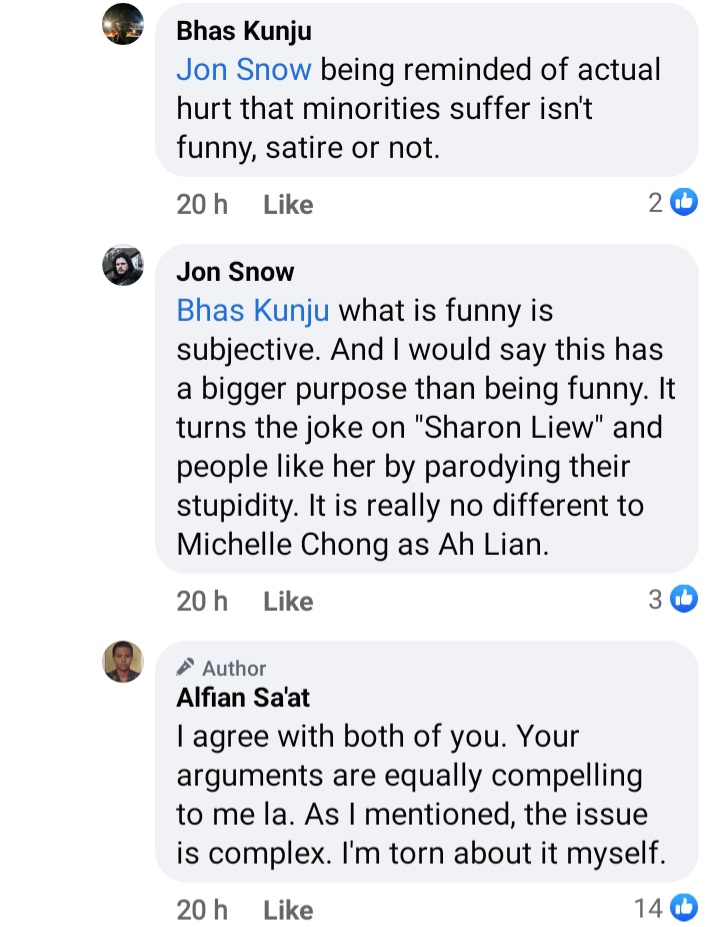 The use of racist satire to “punch up” against the Chinese majority is a very dangerous game. It may be unclear whether Zainal had any malicious intent, but people often masked their racist views behind satire. The fact is parody or not, Zainal’s tweets caused more harm than good to the race relations in Singapore. Instead of patching the gaps in the social fabric, his actions widened the cleavages. Racists would relish in his tweets, reinforcing their beliefs, while minorities are hurt and reminded of their traumatic experiences. Fanning the flames of racial tensions is a recipe for disaster, and there can be no excuse for it.