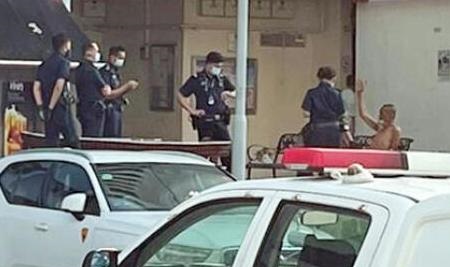 A middle-aged man who decided to walk around the neighbourhood holding two knives, was arrested when members of the public called the police out of fear.

This incident happened on Monday (7th June), at around 8am, at HDB Block 309 at Hougang Avenue 5. The man who looked to be middle-aged was naked from the waist up, and was walking around the neighbourhood while holding two chopping knives. Residents in the area who saw this got so terrified that they called the police.

It wasn’t long before more than 10 police officers showed up at the HDB block, and approached the man who was sitting at a bench. The man could be seen getting visibly agitated and stood up to confront the police officers.

According to the police, a 58-year-old man was arrested for possession of an offensive weapon. No one was hurt during the arrest. Police investigations are ongoing.

SINOVAC is for Poor Countries Because of its Poor Efficacy