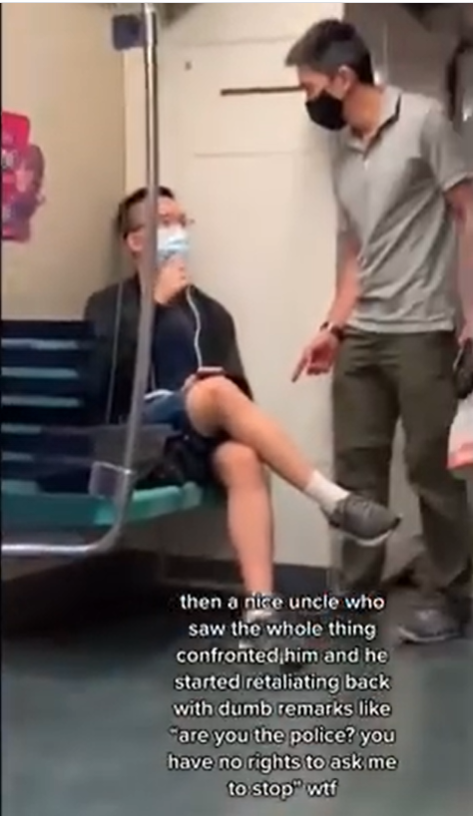 Recently, a TikTok user posted a video of her encounter with a pervert on the MRT who was caught taking a video of her and her friend without their permission. The video has since been reposted on other social media platforms, including Facebook.

Apparently, the man who was seated opposite the two girls had been filming them for sometime, but he his act was discovered after the girls saw that the flash on his phone was turned on.

A man who saw this unfold before him, confronted the pervert, asking him why he was filming the two girls, and that this was illegal. However, the pervert did not admit his wrongdoing, but decided to argue with the man, that he was not a police officer and had no right to stop him from filming the girls.

The two girls who were filmed decided to report this to SMRT staff and also made a police report.

A person doing an illegal act like him, certainly has a ton of stupid excuses. Just for his information, any one has the right to stop an illegal act from being committed.

Sylvia Lim Delivers Low Blow to SPF on their 200th Birthday, Criticises SPF for Low Standards in Training and Investigation

Teen Injured While Hiking in Clementi Forest, SCDF Paramedics Walk 2 km with Stretcher to Rescue Him