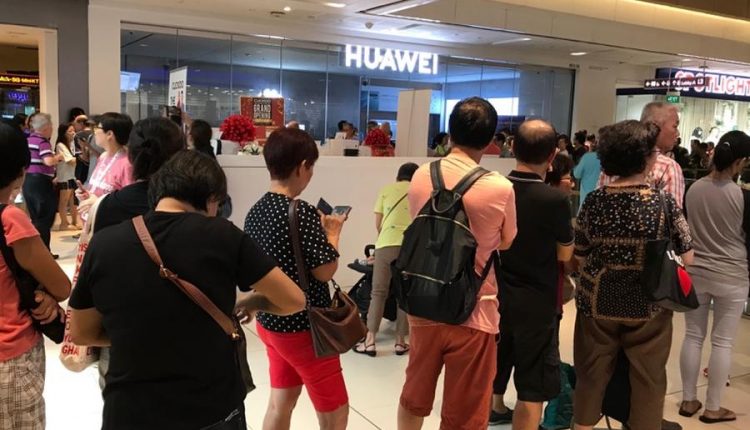 A poorly managed and execution Huawei cheap phone promotion has imploded after hundreds if not thousands of elderly Singaporeans queued up for hours hoping to buy a Huawei Y6 Pro phone at a 70% discount off retail.  Any Singaporean above the age of 50 was eligible for this special NDP promotion and this led to many elderly braving the hours long queue to snap up their dream phone.

Due to the utterly inept planning by Huawei Singapore, many branches had only 10 or less sets of the promotional phone and this information was not communicated to the hundreds queuing up desperately outside the stores.

In some locations, netizens alleged that the Huawei store in question did not even open for business but yet all units of the said Y6 Pro phone were already sold out mysteriously.  Irate customers speculated that Huawei staff who had prior knowledge of the promotion had already purchased the phone and few if not none units were left for members of the public.

This terribly planned Huawei promotion has put a serious dent in the Mainland Chinese company’s attempts to arrest the months of bad press internationally.  At some branches, tempers boiled over and physical altercations occurred, requiring the Singapore police to step in to maintain law and order in these locations. Should a private company like Huawei not be held responsible for the use of valuable public resources as a result of their poorly planned activities? Why should taxpayers be paying for the screw up of a private company when they should be the one managing such issues with the hiring of a private security firm?

Worse still, the Singaporean elderly now have a terrible impression of Huawei, for having made them queue hours all for nought. If Huawei Singapore’s objective was to drum up publicity for its bruised brand name, this debacle has made it worse as consumers were left disappointed and authorities pissed at the safety problems it caused.

Perhaps its time for Huawei to bring out its sincerity and do a proper promotion instead of a half-baked one seen today. Being Contented with What You Have