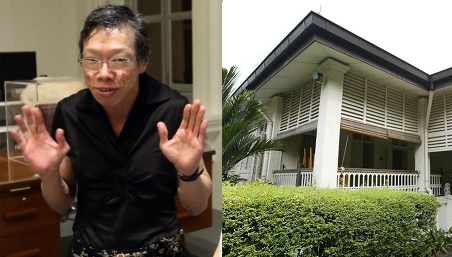 Lee Wei Ling has spoken up again about her displeasure with her eldest brother, PM Lee Hsien Loong, and how he handled the 38 Oxley matter. This comes after LHL’s repeated clarification that their father was actually open to options other than demolition.

She quoted her brother as having said that LKY was unwavering over the years and doubted that their father would have changed his mind so easily. She is convinced that LHL had “led Papa and the family to believe that Oxley had in fact been gazetted”.

Lee Wei Ling was unhappy as she thinks that LKY had only wanted to demolish the home and nothing else. She is against the idea of preserving it as she did not want their family’s privacy to be infringed upon and does not want their home to become a “shrine” for people to “worship”.

As I stated in a Facebook post previously, one has to be remarkably dumb or ill-informed to not know what LKY wanted to happen to his marital home. He spent his whole life looking after the welfare of Singaporeans both current and further welfare. All he asks in return is that his marital home be demolished and not open to the public or worst of all, turned into a shrine for him. He is strongly against any personality cult and to date, no major structure in Singapore has been named after him. If any Singaporean needs to be reminded of his legacy, just look around at the thriving metropolis and the kind of society we are.

Lee Wei Ling said that their mother was a very private person and would likewise have been against “public tramping through her family home”. She also thinks that the PAP wants to form some kind of LKY cult and blamed them for wanting to keep the house for this purpose.

The problem is that the PAP is trying to build a LKY personality cult. I hope this will fade away. Not because I am an unfilial daughter but because I want Singapore to continue to prosper and survive beyond LKY.

This is a minor reason as far as nation building is concern. But I am certain that forming a LKY personality cult is bad for Singapore. I had to move on after Papa’s demise and so should all Singaporeans. To look back with yearning for a dead leader means the country will never progress beyond the current phase.

She stressed that her father would not have wavered in his decision to demolish 38 Oxley and hopes that Lee Hsien Yang, who has bought over the house, will help fulfill that wish one day.

In a special session of Parliament on 13 April 2015, my older brother Hsien Loong said:"Mr Lee’s position on 38 Oxley…