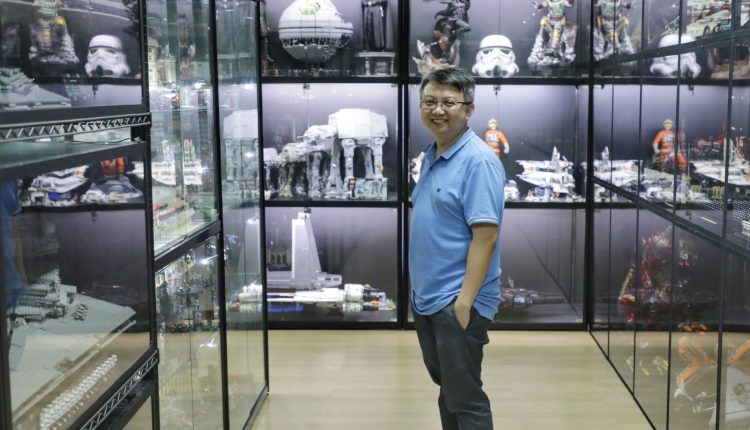 Phelan Chan is a 44-year old engineer and a hardcore Lego fanatic who has spent more than 100k over the last five years collecting over 2000 sets of Lego, and has even bought a commercial storage unit to store and display his collection.

In an interview, Phelan revealed that his obsession with Lego started when he was in primary three, when his mother bought him a Lego castle set for him. However, he did not start collecting Lego sets until five years ago, after buying Lego sets for his two sons. According to Phelan, buying the Lego sets for his sons sparked his passion for Lego sets again, and that was when he decided to start his own collection.

However, it wasn’t all smooth sailing for Phelan, as his wife was not particularly supportive of his crazy expenditure on his Lego collection. It wasn’t later when their sons also joined in the Lego hobby that Phelan’s Lego collection soon became a place for them to spend quality family time together.

Phelan added that not only has the Lego hobby brought him closer with his two sons aged 9 and 11, it also allows him to reduce stress after a long day at work. Phelan mentioned that his current collection mostly consist of Star Wars themed Lego sets, but he intends to add a DC (E.g. Superman, Batman series etc) themed Lego collection in his storage unit soon.

Donnie Yen Makes Visit to Singapore, Gets Received by 5,000 Fans at Our Tampines Hub