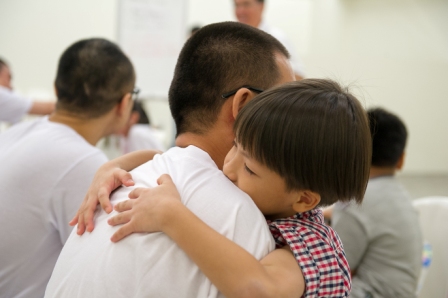 Much to Jun Liang’s (not his real name) delight, his wife visited him in prison with their daughter in tow. However, on this visit, his wife who had previously promised to wait for him to finish his jail sentence, had told him that she wanted a divorce.

While this came as a shock to Jun Liang, he did not give up, and requested that he be allowed an additional 10 minutes with his wife. Using the precious time he had, Jun Liang managed to convince his wife that he was a changed man.

Jun Liang credits his change to the various counselling sessions and courses he attended in while in prison. Under programs such as ICAN (Involvement, Consistency, Awareness, and Nurturance), Jun Liang could go through various fathering workshops, and father-child bonding activities, to enable him to become a responsible father.

According to the 54-year old, he married his wife in 2014, who bore him a beautiful daughter in that same year. However, Jun Liang was arrested for drug related offences when his wife was pregnant with their second child.

While he was in prison, Jun Liang’s wife promised that she would patiently wait for him to finish his jail sentence. His wife had been visiting him nearly on a fortnightly basis, until two years later, when she only visited once every 5 to 10 months. It was then that Jun Liang noted that his wife had become colder towards him.

A prison officer who observed that this had adversely affected Jun Liang’s emotions, arranged for him to undergo counselling under the ICAN program. Through this program, Jun Liang managed to change himself for the better. According to a prison officer, Jun Liang is now better able to control his temper, and let go of his ego.

During his wife’s latest visit, Jun Liang was able to convince her to give him a second chance. He persuaded his wife to attend a family gathering organised by the prisons next month, and told her all about his plans to become a better parent after his release from prison. Jun Liang said he was touched by his wife’s willingness to give him another chance, and says he will treasure this chance, and strive hard to be a better man.

14-Year Old Teenager Angered by Auntie Who “Tsk” Him, Ends Up Getting Physical