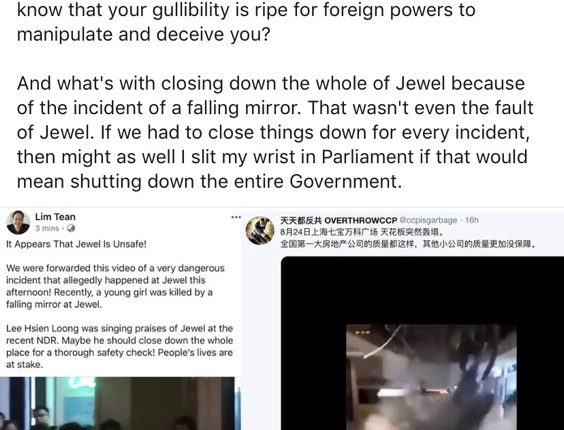 Don’t Believe Everything You See Online, Even Lim Tean Can Fall Prey to Fake News

To be a good lawyer, one must not only have good judgement skills, analytical skills, but also good research skills. Which is why I do not understand how Lim Tean (Secretary General of People’s Voice Party), a notable lawyer who founded his own law firm, could form conclusions and make public accusations before verifying the source of information.

Just two days ago, a video showing a roof collapsing due to leaking water pipes at an unidentified shopping centre went viral on social media. Many netters speculated that it might have happened in Jewel Changi, Singapore. Local news media later clarified that the video was taken at a shopping centre in Shanghai, China (link to article).

While the average netter can be forgiven for making such unfounded conclusions, it seems rather ridiculous for a prominent lawyer like Lim Tean to make the same mistake. Not only did Lim Tean, who holds both a Bachelor of Law (LLB) and a Masters of Law (LLM), jumped to this conclusion, he decided it was high time to declare Jewel Changi unsafe and demanded that the Prime Minister shut the whole place down for a thorough safety check.

He also took the chance to link the incident to the death of a toddler who was crushed by a falling mirror at Jewel Changi some days ago (link to article). 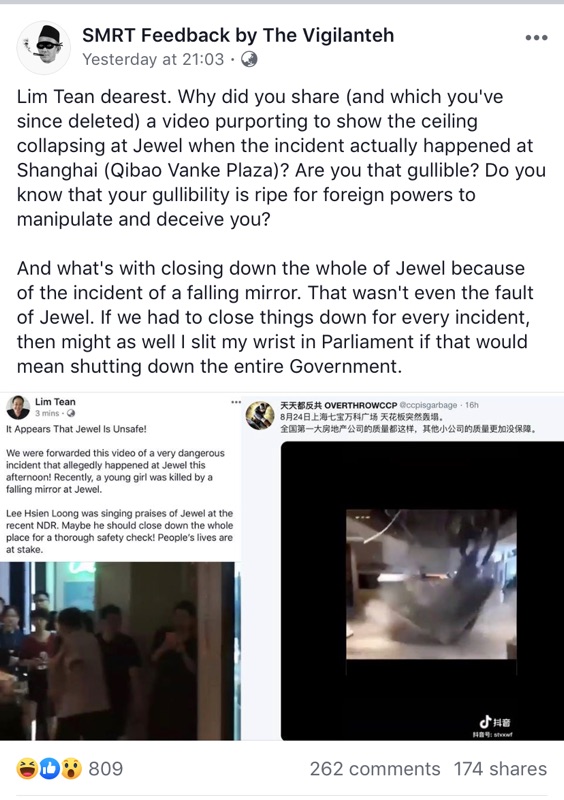 I’m sure many readers with the slightest bit of common sense would know that the incident involving the death of the toddler had little to do with the safety of Jewel Changi per se, but was the unfortunate result of negligence by the fashion store or maybe the parents. So why did he bring up two unrelated incidents? Was he simply jumping at the chance to blame the government for everything?

For him to be “the voice of the people”, Lim Tean cannot shatter the trust of Singaporeans by letting himself be so susceptible to fake news. For someone so educated and eager to keep our government in check, he should really have known better. If he continues to make such blunders, will Singaporeans trust him at all?

Opinion: Should Drug Traffickers Be Treated Leniently Or Be Responsible For Their Actions?