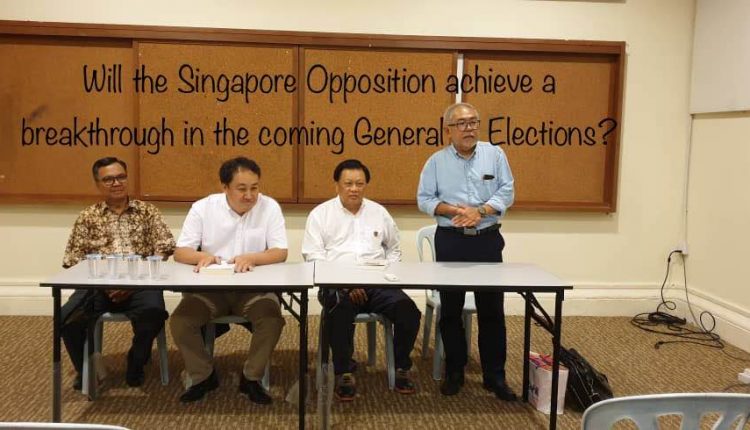 On 25th Aug 2019, members of the People’s Voice Party (PVP), Lim Tean, Mohamad Nassir Ismail and Leong Sze Hian shared their thoughts on Singapore’s political scene in a public forum titled “ Will the Singapore Opposition Achieve a Breakthrough in the coming General Elections?”.

The PVP members were invited to the forum by Tan Wah-Piow, a former Singapore student leader who has been living in political exile in the UK since 1976 for allegedly being behind the Marxist Conspiracy.

For those unfamiliar with Tan Wah-Piow, he was a notable student leader in the 70s and was the president of the University of Singapore’s (now known as the National University Singapore) Student’s Union. In his time as a student leader, he mobilized students to become active for democracy and social justice. He was involved in an industrial dispute himself, instigating workers to agitate against their employers.

Highlights of the Forum

The forum lasted for more than two hours. To save readers some time, here are some points that were mentioned in the discussion:

Lim Tean mentioned that the PAP refuses to implement a minimum wage policy because it will result in unemployment. Lim Tean strongly disagreed with that and thought that it was “nonsensical” for Singapore to be the only major asian country not to have minimum wage.

However, he does not take into account that with minimum wage, there will be increased labour costs that will eventually be passed on to Singaporeans. Furthermore, employers will probably cut down on its staff or overload workers with more duties. In his own words, Singapore is already one of the most expensive cities to live in. So why would we want to make it worse?

One of Lim Tean criticisms of the PAP is that the ruling government of the day is managed by a very small group of elites. These are individuals who are very academically inclined but may not have the necessary experience and skill set to properly manage a government agency.

Those picked for the job have to go through a rigorous selection process and while people may hate them for being elites, some of them do have the necessary skills to run a country. If we do not choose the best, who else can we trust to lead our government?

One of the most important segment was when they talked about the opposition and its ability to take over the Singapore Government. They had faith in the opposition as they saw the incumbent as the worst ever in Singapore history. They picked on the flaws of the PAP’s policies, such as the CPF withdrawal age, lack of free education, healthcare and elderly retirement. They are positive that the opposition is putting forth great ideas, and believe that Singaporeans will see for themselves during elections that the PAP is actually very lacking.

Well, anyone can point out the flaws in a system or model, but it takes real hard work and tenacity to come out with sound solutions. Will opposition politicians like Lim Tean, who manages his own law firm, have the time and focus to do the same? We are not as confident as he is but Singaporeans will definitely welcome good ideas, if any.

The forum did not have much substance; discussions were superficial at best. Anyone who wishes to give their views on government policies should have a basic understanding of the mechanics of these policies before criticising. The purpose of a opposition politician is to listen to Singaporeans and improve their lives, instead of just complaining about how bad the ruling government is.

The choice of location also casts doubts about the true intentions of these opposition politicians. A public forum pertaining to domestic politics should have been conducted in Singapore instead of a foreign country. It is also questionable why Tan Wah Piow, who till today has denied his involvement in a plot to topple the Government, was involved in the forum.

This forum had initially piqued my interest. However, it appears to be nothing more than a cross-border whining session, and not an actual forum with constructive discussion.