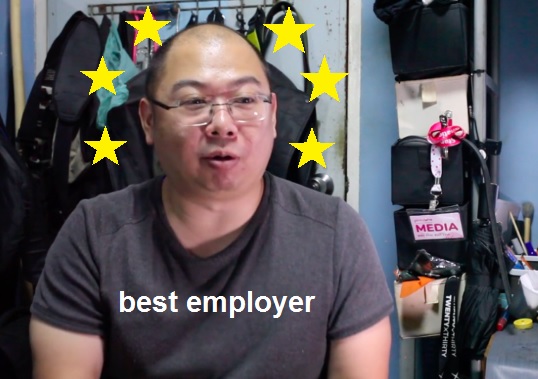 Terry Xu, Chief Editor of The Online Citizen, has shown himself to be a truly caring employer. Xu was recently exposed for hiring foreign writers and letting them publish claims about politics in Singapore. One of them is Malaysian Rubaashini Shunmuganathan, who penned the allegedly defamatory piece on Oxley Rd and PM Lee.

Xu defended himself in a series of online spats with the Critical Spectator’s Michael Petraeus. He believes he did not do anything wrong for letting foreigners write about politics in Singapore or choosing to hide their identities with fake names. He does not seem to mind that Singaporeans are consuming information from TOC thinking that they are written by locals.

On the contrary, he thinks that he is already going out of the way by protecting his foreign writers with fake names. He said that it was the only way to prevent them from being harassed.

As an employer I have to guarantee their personal well-being… I believe that if my writers were to use their real name, IBs and agents will try to discover their identity and harass them in order to stop working for me.

However, he also said that he had revealed Rubaashini’s real name after she was exposed as it did not make a difference: “[I]t has not changed the nature of her work which is to write according to my given instructions”.

TOC writers must be happy that they have someone as selfless as Terry Xu as their role model. It is not easy to make allegations about another country’s politics while pretending to be a local and still enjoy protection by an employer. Now that things have become more volatile for TOC, maybe they can demand for higher pay as assurance of their safety. Who knows, a good boss like Xu might just make it happen! 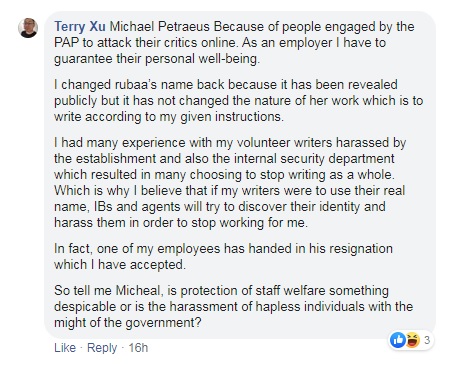 Influencer Made Insensitive Post About Sikhs, Tried To Make Amends By Learning More About Their Culture

Yale-NUS “Dialogue & Dissent” Cancelled Due To Alfian Sa’at’s Lack Of Responsiveness, Course Was Not His Priority