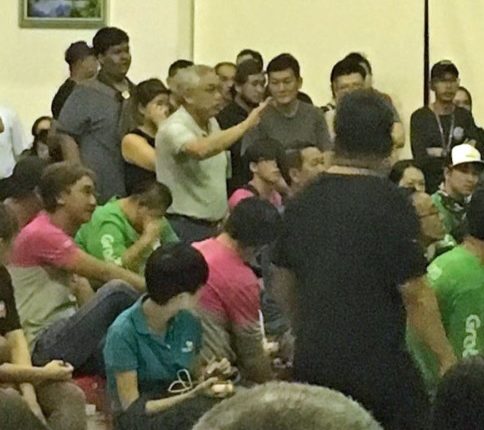 The recent PMD ban has caused many unhappy food delivery riders to voice their concerns at various Meet-the-People Sessions. Yesterday, an old man was seen in a few videos raising his voice and questioning the ban. Turns out, the old man is Goh Meng Seng from the People’s Power Party. He does not ride a PMD.

He said that he had “taken the trouble” to attend two MPS because his friends were persistent for him to do so. He gatecrashed Mr Chee Hong Tat’s MPS at Toa Payoh and Dr Lam Pin Min’s at Sengkang.

Although he is no PMD rider, he claims to have spoken up for them by asking the respective MPs about their plans following the ban. He strongly thinks that PMD riders do not need financial help and argued that there is no point in banning PMDs as accidents are bound to happen anyway.

I made the point that either you believe PMD will bring benefits to our society or not. If not, then ban it. If yes, look at measures to get it used safely. (???)

It was apparent that many PMD riders who were at the MPS did not recognise him. Nevertheless, he seemed confident that he has gotten some support because they cheered him on to ask more questions.

Unfortunately, some netizens did not share the same sentiments. They called him out as an opportunist who made the effort to gatecrash both MPS so as to get more attention and support for himself. If he was not there as a PMD rider (because he isn’t one), or a resident (because he also isn’t one), then what was he there for?

Responding to this, Goh Meng Seng assured that he was not trying to score “political points” or intentionally mock Mr Chee and Dr Lam. In his closing comments on Facebook, he described the encounter as a “silly night” and demanded that everybody should buck up.

Thanks to Goh Meng Seng, PMD riders now know who to turn to for help, support and new solutions to solve their problems. Good effort by the old man!

I Am A Food Delivery Rider. I Think It’s Possible For Govt And PMD Riders To Agree With Each Other