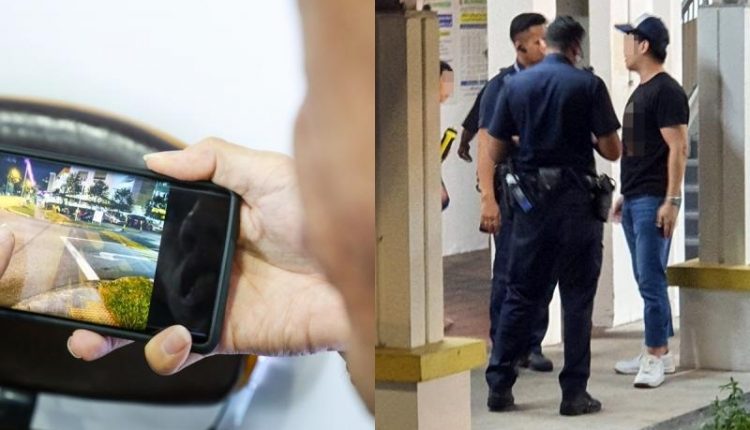 A man and his eight months pregnant wife were crossing the road, when a taxi suddenly made an abrupt turn onto the path of the couple without signalling his intention, nearly knocking them down.

After the incident, the man wanted to remind the taxi driver of his dangerous driving, but was instead accused of getting physical and challenging the taxi driver to a fight. The taxi driver later left the scene, but not before flashing his middle finger at the man and his wife.

This altercation happened on Wednesday (1st Jan 2019) at around 8.55pm, in an open-air carpark located at Hougang Avenue 8 between HDB blocks 682 and 684.

According to the affected party Mr Cheng (a 29-year old salesman), he was making his way across the carpark’s entrance with his pregnant wife, when a taxi drove at high speed and made an abrupt turn into the carpark without even signalling, nearly knocking them down.

Mr Cheng said that the taxi driver did not signal his intention to turn into the carpark, and he assumed that the taxi would be driving straight, instead making a turn. He added that they were lucky to have been walking relatively slowly, and narrowly escaped being hit by the taxi.

Feeling really angry, Mr Cheng went to confront the taxi driver who had parked his vehicle nearby. Mr Cheng said he reminded the taxi driver that he was driving really dangerously, and said “what if” he had knocked down his pregnant wife.

However, instead of apologising, the taxi driver responded by saying that “there is no what if, I did not knock down your wife”. The taxi driver then got violent, and accused Mr Cheng of picking a fight.

Seeing that the situation was getting out of control, Mr Cheng’s pregnant wife went forth to pull him aside, thus defusing the situation. However, as the taxi driver was leaving the scene, he flashed his middle finger at the couple. This made Mr Cheng even angrier, which prompted him to make a police report.

The police are currently investigating this matter.

SDP, MOM Argue Over Who Is Right & Who Is Wrong, But Do Singaporeans Give A Shit?