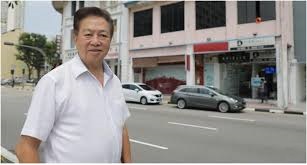 70-year old cleaner Mr Lin Fa Jing and his family of four stays in three room HDB flat located in Bukit Gombak. Mr Lin has two children, a 43-year old son, and a 39-year old daughter, both of whom suffer from epilepsy, and must rely on medication to control their condition.

On 28th Dec 2019, Mr Lin’s wife Mdm Chen suddenly passed away. Her passing left the family in great financial difficulty, as Mr Lin struggled to find the money to pay for his wife’s funeral and cremation costs.

Fortunately for Mr Lin, a doctor had recommended the services of Roland Tay of Direct Funeral Services, who is known to provide free funeral/cremation arrangements for those who could not afford it.

According to Mr Lin, his wife’s health had deteriorated for the last few years. She often complained that she was feeling really sick and was having difficulties breathing. However, as she did not want to spend any money for her ailments, she refused to seek medical treatment.

Mr Lin and his daughter are working as cleaners, while his eldest son works odd jobs. They have to depend on assistance from different charity organisations in order to just survive. Mr Lin’s wife Mdm Chen, refused to seek medical treatment, until May of last year, when she said she could no longer tolerate her illness, and decided to go see a doctor.

The doctor’s diagnosis pointed out that Mdm Chen was suffering from a serious bacterial infection, which has affected her lungs and other organs, and needs to be hospitalised for treatment. Mdm Chen spent two months in the hospital, and was later transferred to a nursing home. Mdm Chen’s condition continued to worsen in Dec of last year, and eventually passed away on the afternoon of 28th Dec 2019.

When interviewed, Mr Roland Tay said “Mr Lin and his family has suffered enough, its only funeral arrangements I am helping with, not a big deal, there’s no need to think, just help them”. Mr Roland Tay added that, there is no distinction of wealth, poverty, or status in people, Mdm Chen had a hard life, and deserves to be sent off on her last journey with dignity.