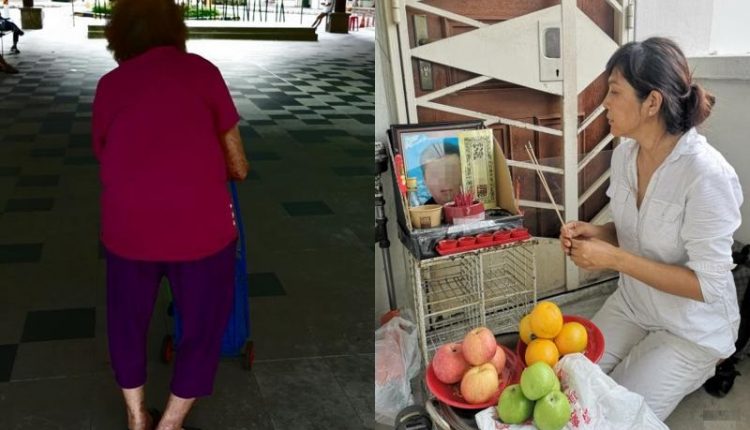 It was supposed to be a simple gallstone removal procedure, after which he would be discharged eight hours later. However, this was not the case for the husband of Mdm Ma Cui Ying who died from complications a few days after the operation. Mdm Ma said that her husband suddenly ran a high fever after the operation on 12th Nov 2019, and had complained of chest pains and breathing difficulties. He passed away four days later on 16th Nov 2019.

According to Mdm Ma, she returned to her mother-in-law’s home on 3rd Jan 2020 to house the spirit tablet of her husband, but was locked out instead. She claimed that she has nowhere else to go, and did not know what to do next. Mdm Ma then decided to set up a prayer altar for her late husband right outside her mother-in-law’s home in Whampoa West.

However, according to Mdm Ma’s mother-in-law, an 80-year old retiree who refused to provide her name, her home at Whampoa West was purchased together with her late husband. She added that her son moved out after he got married, and only came back occasionally to stay overnight during his taxi driving shifts, and that Mdm Ma had never stayed there before. She said that her son and his wife have their own home in Hougang.

Mdm Ma’s mother-in-law revealed that her home currently houses the spirit tablets of her ancestors, and according to her family’s customs and recommendations from a Fengshui master, elders are not allowed to house the spirit tablets of the younger generation in their homes. She said that Mdm Ma had refused all alternative arrangements, and insisted on making a scene outside her home, demanding that her son’s spirit tablet be housed there.

Mdm Ma’s mother-in-law is unable to return to her home, because of the scene that Mdm Ma makes everyday. Mdm Ma would come by everyday to offer prayers to her husband’s spirit tablet right outside her mother-in-law’s home. The older woman has since made a police report and is intending to apply for a personal protection order.