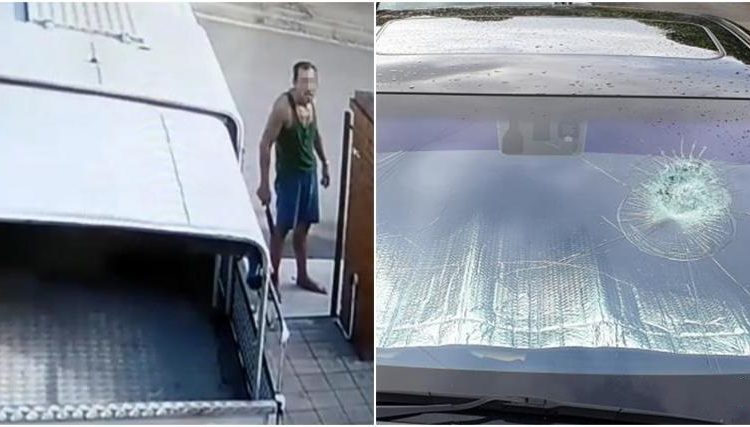 A lorry and a luxury sedan had their windscreens smashed thrice in three days at Yio Chu Kang. A knife-wielding man had been shouting and swinging his knife before hitting the vehicles with his weapon.

This incident happened last Saturday morning outside a landed house along Yio Chu Kang Road. The owner of the house is 48-year-old Mr Zhou, who runs a security systems company.

According to Mr Zhou, one of his workers had gone over to his place to collect the company lorry which was parked outside his house. The worker discovered that the lorry’s windscreen had been damaged and had a large hole. He noted that this was the second time in three days it had happened.

A few days earlier, Mr Zhou discovered a Lexus next door that also had its windscreen smashed. He did not think much of it at that time, until the same thing happened two days later.

Mr Zhou viewed the CCTV footage of his front yard and saw a man wielding a knife that was roughly 20cm long. The man was shouting and making a scene while hacking at the company lorry in front of his house. He also threw a rock at his neighbour’s Lexus. Mr Zhou noticed that the man probably lived nearby and was too afraid to step out of his house.

He immediately made a police report. The knife-wielding 51-year-old man was arrested and was only living just two units away. Strangely, the man claimed that his next-door neighbour had been disrupting his peace when the unit had in fact been vacant for some time. It was suspected that he was under the influence of narcotics. Investigations are in progress.