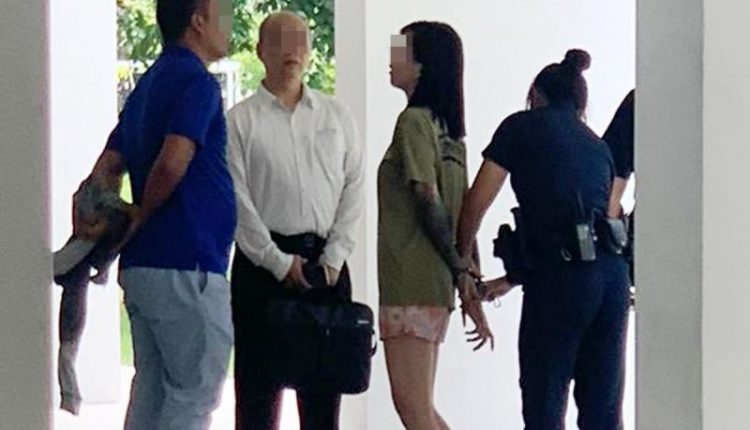 As an argument with her husband intensified, a woman ran into the kitchen and grabbed a cleaver, threatening her husband with it. The husband tried to calm his wife down but to no avail, and ended up getting his fingers injured during the altercation.

This incident happened on 9th Jan at around 1020am in a HDB apartment unit located at Blk 256D Sumang Walk.

According to eye witnesses, on the morning of the incident, many uniformed police officers as well as police investigation officers in plain clothing were seen at the location of the incident.

Mr Gao, a 21-year old student who lives nearby, said that he saw a tattooed young lady being arrested and put on handcuffs by the police at the block’s void deck, and was later taken away in a police car.

Another eye witness who wishes to remain anonymous said that prior to the incident, the couple could be heard quarreling and fighting very loudly, but he/she doesn’t know what triggered off the incident.

The young couple in their 20s, both of whom were heavily tattooed, moved into their HDB apartment about six months ago together with their two-year old daughter and domestic helper.

When the altercation happened, the domestic helper was at the market doing grocery shopping, and was shocked to see her male employer’s hand covered in blood when she returned.

According to neighbours, the couple would quarrel several times a day. The neighbours soon got used to their fights and did not think much of it. The neighbours did not expect the fight to be so serious this time round. The husband is believed to have injured himself while fending himself from his wife’s cleaver.

The police have classified the incident as a case of possession of dangerous weapons with intent to cause harm, and have arrested a 23-year old woman. According to SCDF paramedics who responded to the scene, one man believed to be the woman’s husband was injured, but refused to be sent to the hospital for treatment.