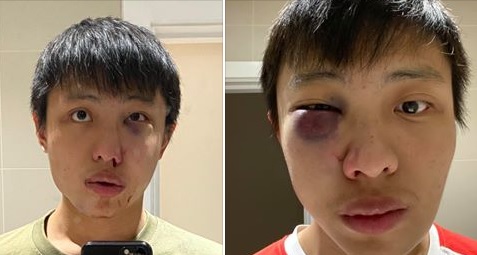 Singaporean in London racially attacked for ‘bringing coronavirus into their country’

A Singaporean studying in London, Mr Mok, was recently attacked by a gang of racist teenagers. The incident happened at one of the busiest streets in the city – Oxford Street.

He was walking past the group of teenagers when one of them stared at him and made a remark about him and coronavirus. They were angry at him because he was Chinese and thought that he was bringing “his coronavirus” into their country.

I was stunned and turned around to have a look at the man made the statement. He was still staring at me as he walked past and realised I was looking at him. He shouted ‘Don’t you dare look at me, you ____’ (I could not catch the last word because of the accent).

Within 3 seconds, he was in my face, together with 3/4 other young men, and a young lady (all of whom seemed no older than 20 years old, but were all more than a head taller than me). I was shocked and angry because he directed a racist remark at me and had the audacity to shout at me like I had wronged him.

All of a sudden, the first punch was swung at my face and took me by surprise. When I was still shocked by the first hit, the guy delivered the second sucker punch.

A few passer-bys tried to reason with the group of teenagers but to no avail. It took a few more punches until the attackers walked off. By then, Mok already suffered fractures to his face and had blood splattered all over the pavement. He now has to undergo reconstructive surgery to fix the bones in his face.

Mok has had a fair share of racist experiences even in a supposedly first-world, open city like London. He used to believe that racism stems from stupidity but has more to say after his gruesome encounter.

Racism is not stupidity — racism is hate. Racists constantly find excuses to expound their hatred— and in this current backdrop of the coronavirus, they’ve found yet another excuse… People dismiss racism with statements such as ‘it’s not all of us — only a minority are racists and this does not reflect on a city/country’. While factually true, not only it does not change the fact that this is an ugly problem that has plagued humanity for a very long time, but also it belittles this problem we have. Racism has changed it form and shape through the years and it is once again rearing its ugly head in light of the COVID-19 crisis.

To the group of guys who saw fit to attack me because of my skin colour: here’s something for you— I stood up to you because I wasn’t afraid, I’ve faced far more intimidating characters in my life. And if you think ganging up on someone who is sizeably smaller than you makes you a big man — it doesn’t. It only makes every single one of you a coward who doesn’t have the balls to take someone on 1 on 1. Grow a pair.

He is still looking for evidence and witnesses to the incident.