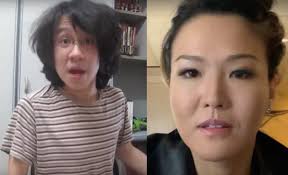 Most Singaporeans would have heard of Amos Yee and his controversies. However, human rights activist Melissa Chen has more to reveal about his unstable state of mind and his life in the US. After all, she was the one who helped him get asylum there after meeting him once.

Chen was speaking in Xiaxue’s #NoFilter podcast and described him as incorrigible, irresponsible and unhygienic. She is no psychologist but did not shy away from dishing out details on his private life.

The both of them only met once and had cut off contact in 2017. At that time, Chen heard from a friend that Amos would keep bottles of urine in his room despite sharing the space with a roommate. He also carried his belongings in a trash bag.

She suspects that he has Oppositional Defiant Disorder as he was often hostile and rebellious just for the sake of it. He hates it when people tell him what to do. He does not respect or listen to his parents and would verbally abuse his mother.

Chen is certain he has Narcissistic Personality Disorder as he sees himself as a gift to the world. He never got a job in the US because he thinks he is too good for one. He was someone special who was trapped in Singapore.

Although she had only seen him once, she is sure that he has more mental problems that are too late to be treated. She believes that his parents may have had a part to play in how he turned out today. While not a parent herself, she thinks that Amos’ mother is too soft in her parenting approach whereas his father could have disciplined him less.

Chen may be an activist who supports freedom of speech and respect of privacy but she does not tolerate Amos for taking these for granted and crossing the line.

Uncle Molests Woman While Pretending to Sleep on MRT, NS-Man Stops and Confronts Him