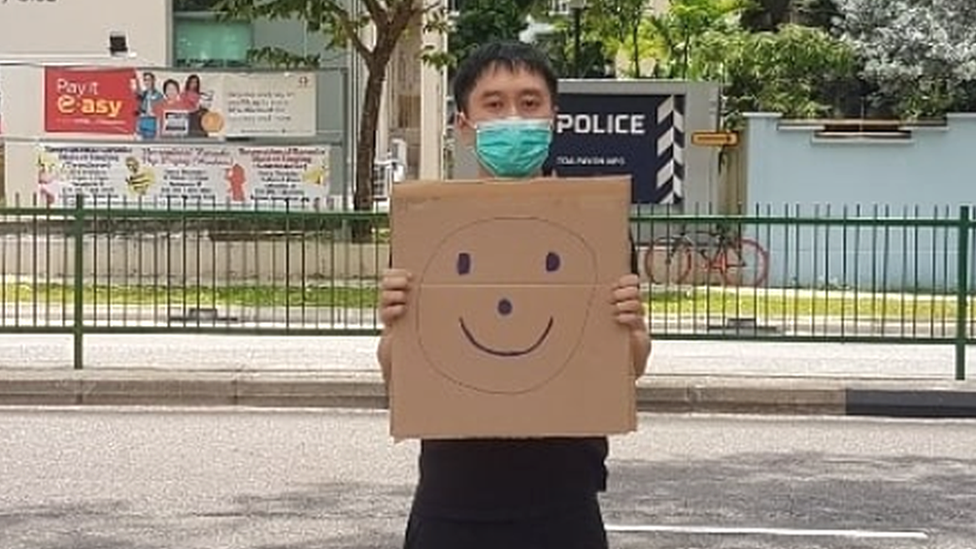 People who have heard of Jolovan Wham may only know him as an activist but there is more to him than meets the eye.

One of the most prominent things he did was to hold up a smiley face sign. At the time, it was his way of showing solidarity with a few Singaporeans who had displayed climate action signs without permit. Since then, he has incorporated the smiley face into his fashion and made it his signature look. 🙂

Over the years, Wham continued to take part in public assembly despite getting charged. In 2017, he gathered a few people (without permit) on the MRT to commemorate activists who were arrested in 1987 for plotting to overthrow the government.

A year later in 2018, he stood outside the former State Courts with a sign to show support for TOC editor Terry Xu and TOC contributor Daniel De Costa. Both of whom were charged for defaming members of the Cabinet.

He constantly tries to challenge the government even though he knows that he will get punished for it. If he is not brave, who is?

In 2016, Wham actually chose to go to jail for 16 days instead of paying a $3200 fine. He also refused to sign a police statement. He had organised a public assembly and discussed issues relating to civil disobedience with Hong Kong pro-democracy activist Joshua Wong.

He fights for the oppressed

Be it migrant workers or LGBTs, Jolovan Wham has always been vocal about fighting for their rights. He was allegedly the mastermind of the protest against transphobia that was recently held at MOE. Although he chose not to show his face or take part in holding placards, he will surely be the one to turn to if you feel oppressed and need someone to make your life fairer.

He is a gentleman

A true gentleman, Wham apologised to Manpower Minister Josephine Teo in 2020 for accusing her and her husband for corruption. He had made false allegations against them for profiteering from the development of care facilities for Covid-19 patients. Who wouldn’t find a man who admits his mistakes attractive?