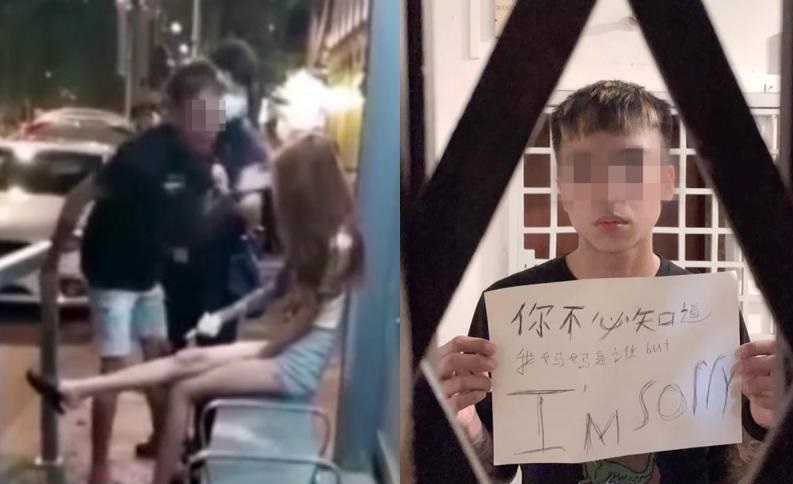 Last Thursday (25th Mar), a 24-year-old man was arrested by the police for slapping his ex-girlfriend during an altercation that happened at a bus stop along River Valley Road.

It was gathered that the 24-year-old man was drunk, and continued slapping his ex-girlfriend even after the police arrived, prompting the police to arrest him.

During the arrest, the 24-year-old man could be heard boasting “Do you know who my mother is?”, which attracted much speculation by netters that the young man’s mother could be some big shot, and that he was untouchable by the police.

Speaking to reporters, the 24-year-old man’s ex-girlfriend Kae (21-years-old) said that they had broken up after dating for about a year, but he suddenly appeared before her that night and started quarrelling with her.

The 24-year-old man had tried to drag Kae into his car, but was unsuccessful, causing her to fall and sustain cuts and bruises. Kae’s friend later sought help from a police patrol car passing by.

Kae clarified that the 24-year-old man’s mother was not a big shot, but just a very loving mother who dotes on her son a lot, giving him whatever he wants. She asked netters not to speculate about the identity of the man’s mother, as she is a just a mother who cares a lot about her son.

Wife of Food Delivery Rider Killed in Kovan Accident: “I Will Never Forgive the Driver who killed my Husband”

26-Year-Old Indonesian Domestic Helper Falls to Her Death, Minutes After Texting About Dizziness to Friends