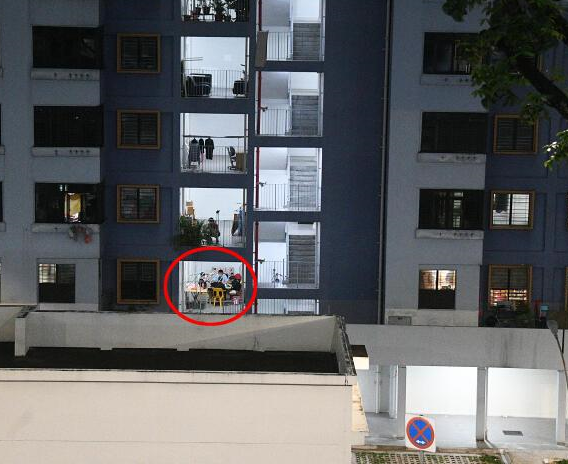 Several residents staying at a rental housing block in Chin Swee Road, were seen playing mahjong at a staircase landing for nearly 24 hours a day, despite the new Phase Two heightened measures.

This incident happened outside a rental housing unit at the second floor of Block 11 York Hill. Eye witnesses say that a group of men and women who appeared to be in their 20s and 30s were playing mahjong day and night on a table set up at the stair case landing.

A resident who wished to remain anonymous said that apart from the four people playing mahjong, there were another three or four people watching at the side, while there were also others were resting inside the rental housing unit. The resident observed that none of them were wearing masks.

Apart from playing mahjong, these people were also drinking and smoking, leaving hundreds of cigarette butts on the floor, as well as their rubbish for the cleaner to clear the next day.

Another resident complained that just last night (18th May) around 10 people were seen at the staircase landing, playing mahjong and talking loudly without masks, until 6am this morning.

There were also instances where the group would get into arguments and fights. In one incident, the mahjong table was even thrown downstairs.

Some of the elderly residents living in the area are finding it difficult to sleep at night with all the noise, and hope that the authorities would quickly take action against these rule breakers.