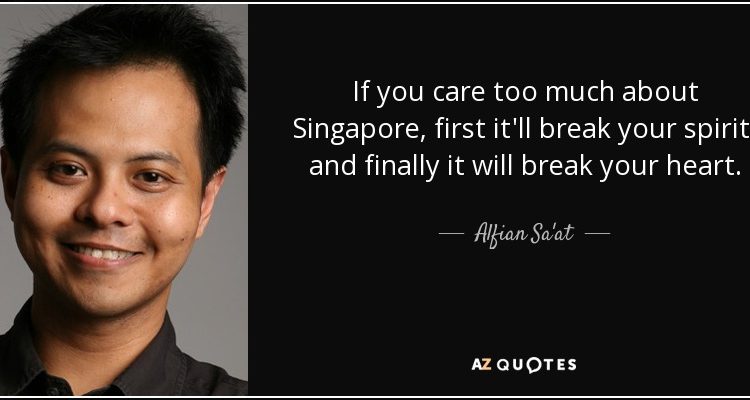 Alfian was a student of top schools in Singapore. He studied at Raffles Institution and later Raffles Junior College. He was also a fourth year medical student at the National University of Singapore. He dropped out of medical school to avoid serving the six year training bond.

Since 1994, Alfian Sa’at has been active in the Singapore creative arts scene. To date, his accolades include: 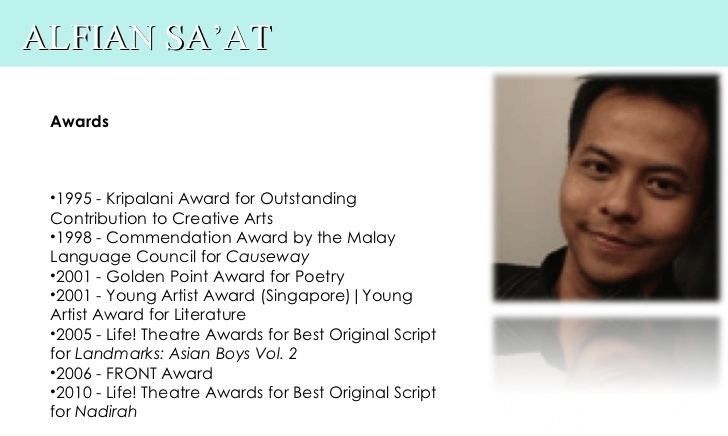 One of his more prominent theatre works is a play titled “Cook a Pot of Curry” which he wrote in 2013. The play was inspired by an online campaign of the same name, which was started by netizens in Aug 2011 in response to an uproar about a mainland Chinese family who took offense at an Indian family’s curry cooking smell. After seeking mediation, the Indian family decided to cook curry only when the Chinese family was not at home.

Known to be vocal and independent minded, Alfian has no qualms about expressing his personal views publicly, such as how he feels about Singapore’s political system and its leaders. When Singapore’s founding Prime Minister Lee Kuan Yew passed away in 2015, Alfian wrote a sarcastic FB post about the late Mr Lee’s contribution to Singapore.

In 2015, Alfian took offense at former NMP Calvin Cheng’s FB post which alleged that his creative works were inciting racial and religious disharmony. 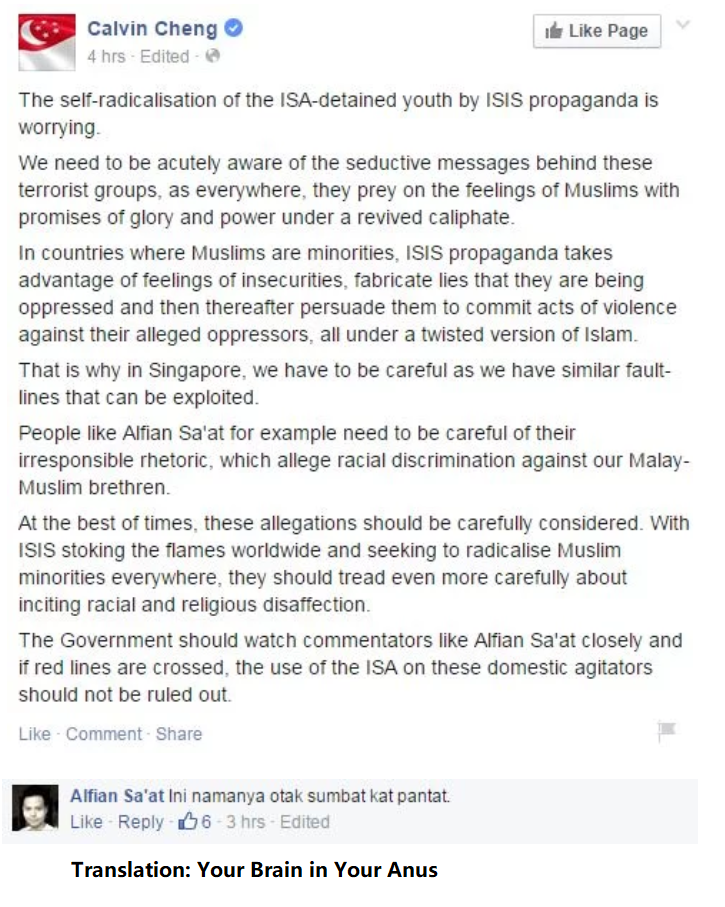 Alfian threatened to sue Calvin Cheng in court for alleging that he was responsible for the radicalisation of youths who want to join ISIS, unless the latter removed his FB post within 24hrs. Alfian also added that he did not have the appetite for “these kind of facebook spats” as he had just lost his mother and his family was still grieving.

It is understandable that Alfian asked for respect and space to grief when dealing with the loss of a family member. However, he does not accord the same respect to those who have passed on or those who are mourning the loss of a loved one.

Another case-in-point is Alfian’s email to former NMP and NUS law professor Thio Li-ann. Being a fervent supporter of LGBT rights, Alfian had sent a threatening email to Professor Thio in response to her support for S377A of the penal code. 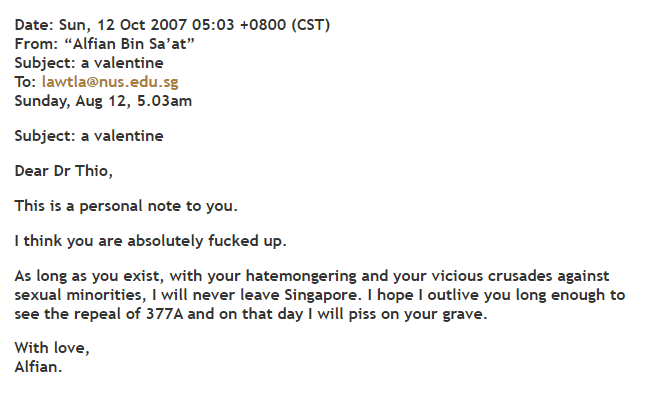 Fast forward to 2019, Alfian made a FB post regarding the online mob attacking and spreading disinformation about fellow activist Kirsten Han, over the cancellation of the “Dissent and Resistance in Singapore” programme by Yale-NUS.

It seems that when it suits him, he asks for respect and for others to be civil towards him and his fellow activists. Those who do not share his views apparently do not deserve the same treatment.

Alfian had intended to invite local activists such as Jolovan Wham, Seelan Palay and Thum Ping Tjin to offer their insights during the “Dissent and Resistance” programme. It appears that Alfian did not consult Yale-NUS College while designing the programme. 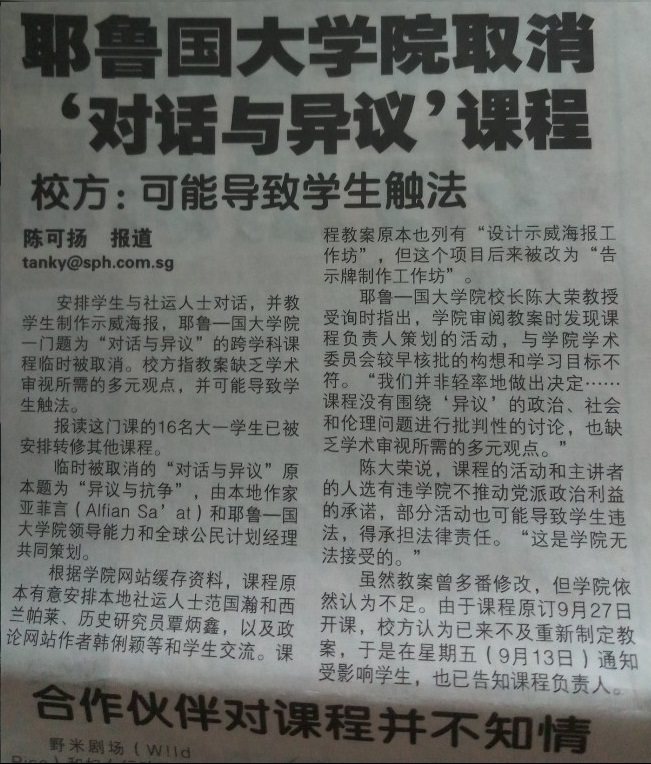 In addition, Alfian had listed Wild Rice (theatre company led by Ivan Heng), Association of Women for Action and Research (AWARE) and eight other organisations as the programme’s participating partners without their knowledge.

When interviewed by local news media, AWARE’s Executive Director Corinna Lim said that she had never heard of the programme. Wild Rice also dissociated itself from the programme, stating that Alfian had assumed the position of the programme lead in his own personal capacity. 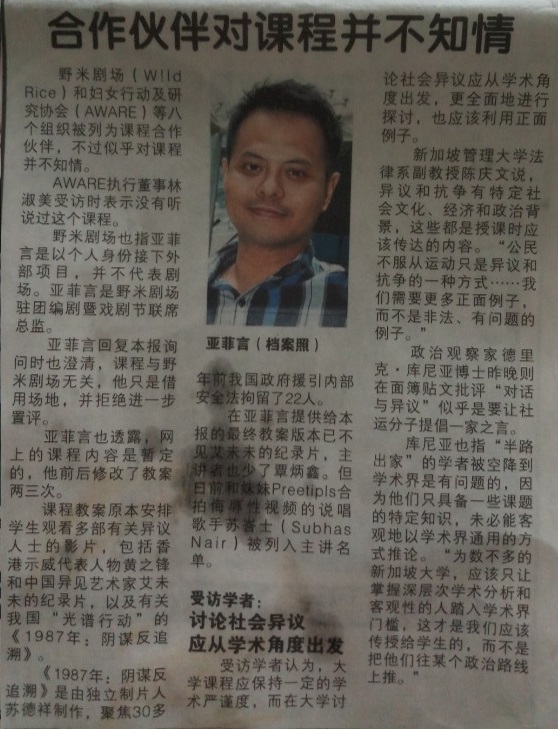 There are several questions regarding Alfian Sa’at which are still left unanswered.

TOC, Terry Xu Exposed For Getting Malaysian To Publish Defamatory Claims About Singapore

Activist Kirsten Han Demands Today To Correct Accusations Against Her