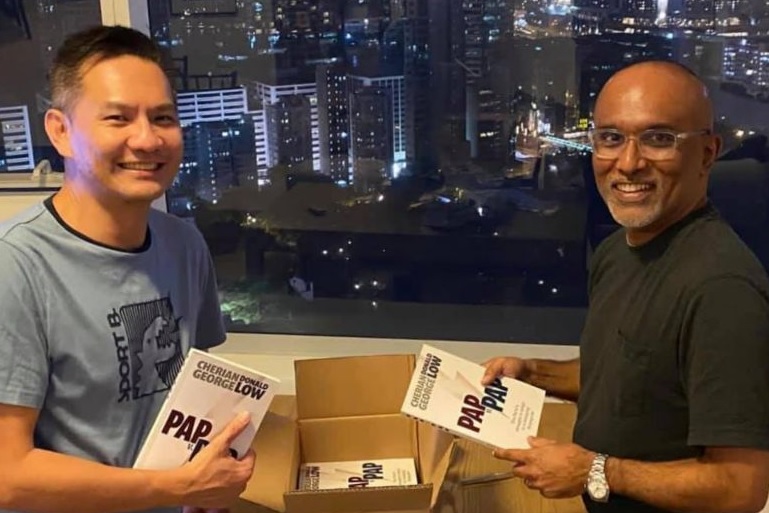 Local academics Cherian George and Donald Low recently had rude encounters with a NUS alumni group called the Raffles Hall Association (RHA). They were supposed to speak at a public discourse webinar organised by the RHA but were removed at the last minute without explanation.

They were displeased at the lack of professionalism of the event organisers, who did not contact them at all. They had only heard about their removal from their friends and the social media.

Both of them had planned to talk about their new book, “PAP VS PAP”, which comprises essays regarding the PAP. Although they were replaced by other speakers in the end, the discourteous way in which RHA handled the matter actually gave their book more attention.

In a Facebook post yesterday, Donald Low said that this has, on the contrary, given free publicity for his book:

I’m glad that I no longer have to speak on a Sunday evening to what is likely to be a small audience. Neither my co-author nor I had asked to be invited for this. And the free publicity generated by the Raffles Hall fiasco has boosted book sales by more than the ‘lost’ audience.

Cherian George also announced that the book is already sold out in its online store. They are currently reprinting the books and will resume deliveries soon.

Could the fiasco be a blessing in disguise?

That being said, it is not best the idea to invite the both of them to the same discussion as their views are similar. If it was really about public discourse, the RHA should have put more thought into getting more diverse speakers so as to make the exchange more dynamic and useful.

However, if Cherian George and Donald Low really wanted to talk about public discourse, they can always organise another webinar. It will not be difficult as they are prominent academics in Singapore.

But for now, it seems like they are enjoying the free publicity because why not, when they have nothing to lose?

Cherian George used to be a political journalist while Donald Low was an associate dean at the NUS’ Lee Kuan Yew School of Public Policy.

Bedok Family Tragedy, 35-year-old Mother Who Took her Life Believed to be Suffering from Postnatal Depression